HCSO detectives learned that all three of the individuals were riding in a gold Ford Taurus owned by Jarkese Youngblood just before 3:30 p.m. on Monday, August 24, when a shooting occurred on I-4 near Branch Forbes Road in Plant City. According to witnesses, an individual in the gold Ford Taurus was seen shooting at another car. A 17-year-old male riding as a passenger in the other vehicle with two friends was struck in the torso during the gunfire. His friends drove him to South Florida Baptist Hospital, located at 301 North Alexander Street in Plant City, where the teen later died from his injuries.

"Consider for a moment vehicles traveling at high speeds on I-4," said Sheriff Chad Chronister. "Passenger vehicles, tractor-trailers, and heavy equipment haulers. If the victims' vehicle had lost control, we would be looking at an absolute catastrophe and most likely a devastating number of fatalities."

The shooting incident followed several recent shootings on I-4 and within city jurisdictions of Plant City and Tampa, which led HCSO to begin working closely with the Plant City Police Department and Tampa Police Department, along with the Florida Department of Law Enforcement (FDLE) and Florida Highway Patrol (FHP) in an effort to find potential links between these cases and solve them.

"To address concerns that this incident may be linked to a serial shooter along I-4, fortunately, that is not the case," said Sheriff Chronister.

The agencies worked with the FDLE to conduct ballistics testing from the shootings, which did not confirm a connection between other I-4 shootings over the summer.

Detectives believe that the I-4 shooting on August 24 may have been linked to an ongoing neighborhood and online feud between young people within and outside of the Plant City area. Following multiple interviews, detectives learned that the Youngblood brothers saw a group of individuals they were feuding with while driving down I-4, which is what led Jaris Youngblood to roll down the rear driver's side window and begin shooting at the individuals while his brother was driving.

With the help of statements from witnesses driving on I-4, detectives were able to locate surveillance videos from numerous nearby businesses where the suspect vehicle stopped after the August 24th shooting. Video evidence combined with interviews helped detectives identify the Youngbloods and Sha'Quandra Williams as the individuals in the suspect vehicle at the time of the shooting.

Williams later admitted to detectives that her one-year-old child was riding in her lap in the front passenger seat when the shooting occurred on I-4. Days after the shooting, Williams sold Jarkese Youngblood's gold Ford Taurus to a scrap metal yard in Osceola County in an effort to hide the evidence.

During Monday's press conference, Sheriff Chronister thanked each agency for working together to make an arrest in this case, including FHP, who provided patrol vehicles to block I-4 the day of the shooting, which played a critical role in allowing HCSO detectives to walk several miles of the interstate in search of evidence.

"The Sheriff’s Office and our partners are unified and committed," said Sheriff Chronister. "The announcement of these arrests is a resounding example of how well we work together, and because of the relationship we share with our law enforcement partners, our Tampa Bay community is a safer place." 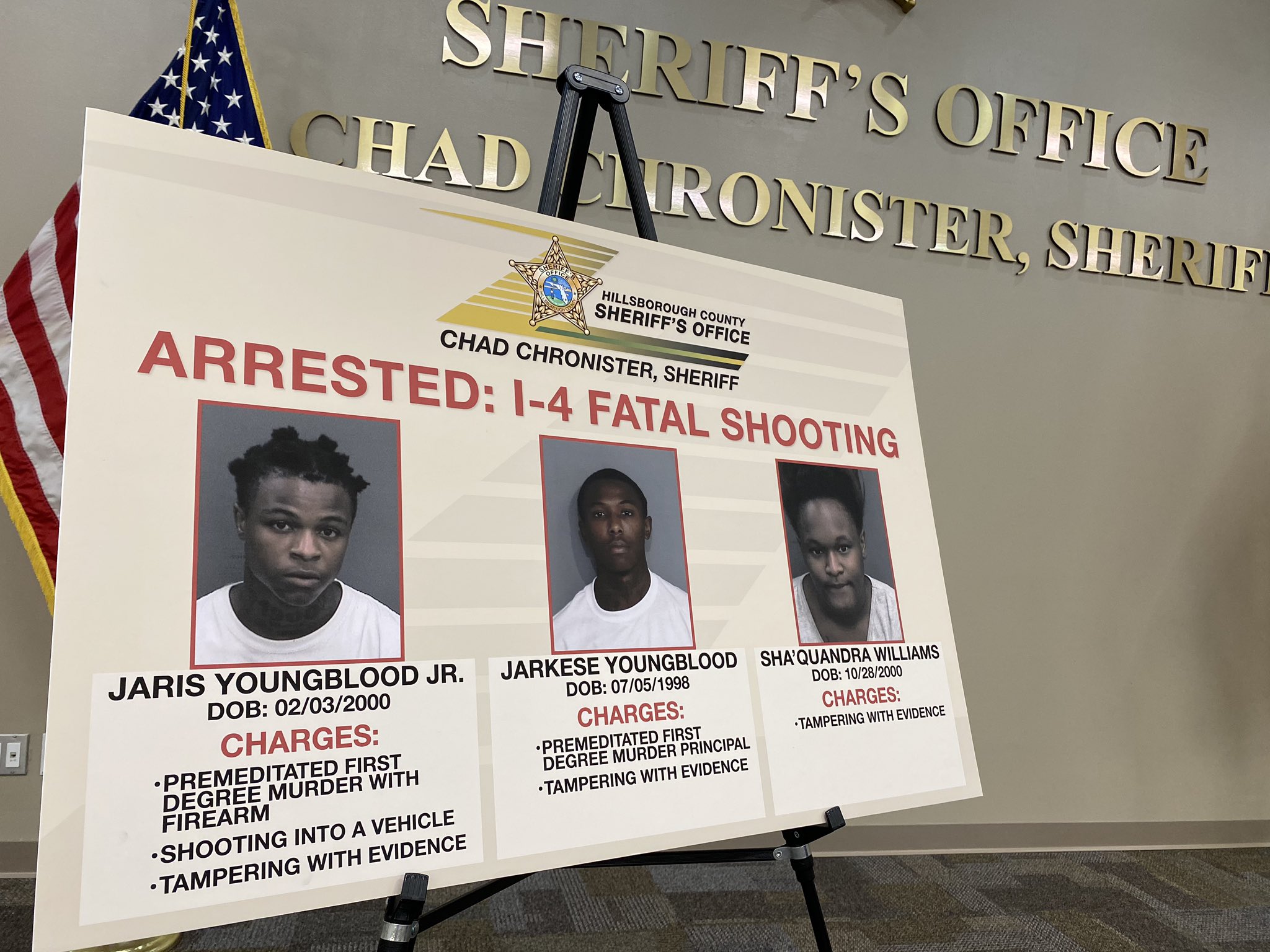