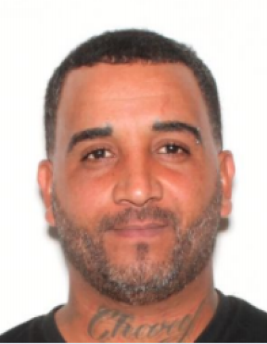 On June 28, 2021, at 1:15 p.m., deputies responded to a shooting at the Windermere Apartments, located at 9474 Windermere Lake Drive in Riverview. Upon arrival, they located an adult male victim outside one of the apartment units. The victim was transported to a local hospital by Hillsborough County Fire Rescue and is expected to survive his injuries.

Detectives learned the origin of the incident actually occurred near the intersection of S 78th Street and Tidewater Trail. The victim then drove himself to the apartments where he was later found by deputies. Through investigative means, detectives have identified the subject as Carlos Diaz, 38. He is believed to be driving a blue Honda Accord, bearing Florida tag NSFI10. A warrant has been issued for Diaz for attempted murder.

"This appears to be an isolated incident at this time, but I want to stress the importance of calling the Hillsborough County Sheriff's Office if you have seen or know where this suspect is currently located," said Sheriff Chad Chronister. "This dangerous individual must be held accountable for his egregious actions."

Anyone with information regarding Diaz's whereabouts is urged to call the Hillsborough County Sheriff's Office at (813) 247-8200.