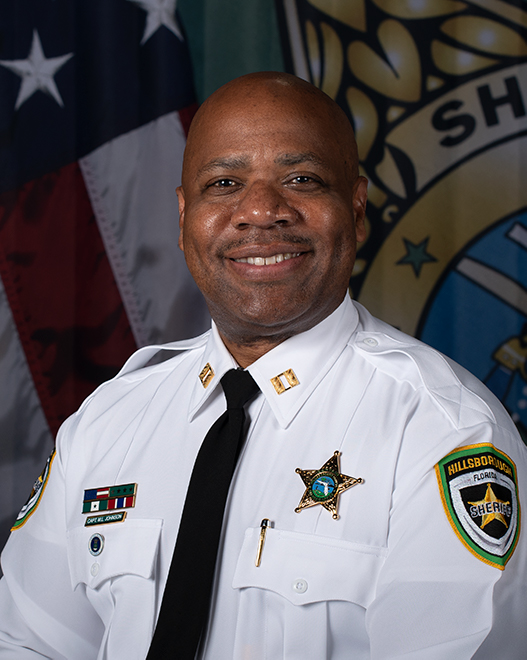 Captain Marvin L. Johnson currently serves as the Deputy Commander for District II. He began his career with the Hillsborough County Sheriff’s Office in 1999 and has held assignments in many areas as a deputy and detective, including Patrol, Street Crimes, and Warrants. He has also served on the U.S. Marshals Fugitive Task Force and the Marijuana Grow House Task Force. Additionally, Captain Johnson served in supervisory roles in the Warrants Section, Narcotics, Street Crimes, Violent Crimes, Patrol, and Community Outreach.

Captain Johnson is a proud veteran of the United States Air Force. He served ten years as a Security Forces Specialist, followed by three additional years as a Reservist called back to active duty service after 9/11. Captain Johnson holds a Bachelor of Science degree in Criminal Justice Administration and a Master of Public Administration from the University of Phoenix. He is also a graduate of the Southern Police Institute’s 146th Administrative Officers Course.

Captain Johnson possesses a strong passion for giving back to the community, interacting with and mentoring the youth of Tampa Bay. He currently serves on the Board of Directors for AMIKids Tampa, Safe and Sound Hillsborough Leadership Council, and Crime Stoppers of Tampa Bay.

Captain Johnson and his wife Belinda have three adult children.