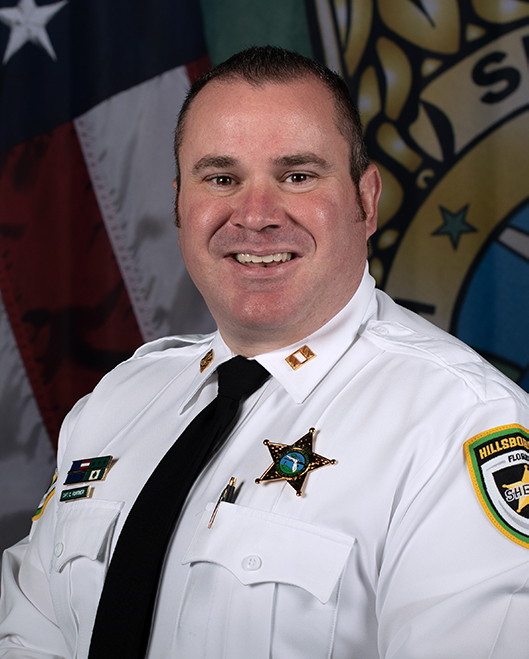 Captain Christopher Fortner is a Tampa-area native. He began his career with the Hillsborough County Sheriff’s Office in 2001, just after finishing high school. His first assignment was as a civilian officer in Central Booking where he inventoried personal property of incoming arrestees. Two years later, he completed the detention academy and immediately found an interest in the department’s security threat awareness team. Shortly into his career, Captain Fortner embarked upon his leadership journey when he became a member of the Field Training Program. He maintained his interest in the Training Program throughout his years as a young leader, serving as a Field Training Corporal, Sergeant, and Program Coordinator. Captain Fortner also spent portions of his career in the Inmate Transportation and Probation / Criminal Registration Bureaus.

While working for HCSO, Captain Fortner earned his associate’s degree from Hillsborough Community College, and bachelor’s and master’s degrees from Saint Leo University – all focusing on public safety and administration. Captain Fortner is a proud member of Tampa’s Egypt Shrine and advocate for the Shriners Hospitals for Children.